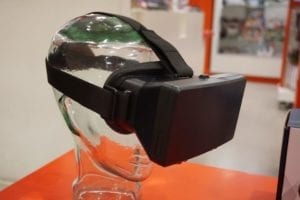 Virtual reality and three-dimensional printing are not just brothers in an era, but integral parts of each other.

The most widely discussed in the media and popular topics related to new technologies, have long been virtual reality and 3D printing. It is not at all surprising what there are two main reasons:

Prototyping of new devices
Creating prototypes of cases and parts of future devices is not complete without a 3D printer. This was created step by step HTC VIVE.

The prototype of the serial model was created as a 3D object, after which it was printed and finalized. This enabled the engineers to hold the product in their hands before the start of production and evaluate its ergonomics and convenience. The same principle was used to create the Surround 360 panoramic camera model (this is an open Facebook project for creating a 3D video camera) with a 360 degree viewing angle:

Additionally, VR is very suitable for sensing volume in spatial 3D modeling: you can simulate a 3D model of a new device on a computer, take a good look at and edit it in virtual space, and then print the prototype of the future device.

Or, on the contrary, scan the existing workpiece, transferring it to a digital format, make the necessary adjustments (which is much simpler and, most importantly, more accurate than on the physical model) and print the new version.

DIY (Do-It-Yourself), that is, homemade VR-headsets for smartphones are becoming increasingly popular among 3D printers, because cardboard Google Cardboard is fragile and short-lived, and commercial plastic samples from different manufacturers are often sold at clearly inflated prices. Therefore, an increasing number of enthusiasts print on 3D plastic analogs of Cardboard and other, more advanced models.
At the same time, the models themselves are free, and printing them on a simple FDM 3D printer will be cheaper than buying cardboard glasses.

This is the 3D model of the simplest virtual reality helmet, i.e. VR-headset for smartphone, designed for self-production:

Many are content to print the simplest Google Cardboard, albeit from a more durable than cardboard, material:

VR headset modeled on Google Cardboard on a 3D printer

There are more thoughtful devices, with the possibility of various adjustments and settings, which, however, are just as easy to print and assemble.

Original VR-headset made on a 3D printer

In addition to headsets, there are other virtual reality devices that you can create yourself. A headset or helmet only allows you to immerse yourself in the space created by someone, but there are devices for those who want to create themselves: spherical cameras.

These are special video cameras, the coverage of which allows you to simultaneously capture the entire surrounding space. You can create a spherical camera for shooting VR-shots and commercials, functionally similar to those used for professional three-dimensional shooting of movies with the effect of presence, having printed a special bracket with mounts for GoPro or other miniature cameras.

Another version of the “conic” frame under the Hero is “Underwater”, suitable for underwater shooting.

Not everyone is interested in home-made printing, many prefer to use devices developed by professionals, but for such users there is a way to use 3D printing in the field of VR – the creation of non-standard spare parts and unique accessories for VR equipment.

New devices appear constantly, and it is expensive and difficult to buy accessories for them – shipping, customs, – all this takes a lot of time and money. Not to mention that not all of them are manufactured and sold by the equipment manufacturers themselves. The way out is simple – you can print, for example, non-standard and not available for sale stands or suspensions for VR-helmets and other components of VR-systems and other interesting accessories that will make the experience of using devices more comfortable and rich.