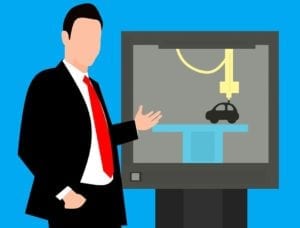 What applications based on 3D printing technology seemed most interesting to us? Read for yourself.

The obtained permit allows the replacement of the traditional element of the PDOS system (motorized door opening system), which is an integral part of GE Aviation GEnx-2B aviation engines used among others. on a Boeing 747-8. This is of great importance when introducing additional technologies in the aviation industry. GE Aviation experts predict that the first GEnx-2B engines with 3D printing elements will leave the production line in January 2019.

The US Navy begins a one-year trial period for the first 3D printed element of a warship
Another item on the list and once again forged promises were in fact. The first spatially structured project was officially adopted by the Command of the Naval Systems, the largest of the five technical naval headquarters of the United States. Some have already passed functional and environmental tests, which included material tests, as well as resistance to shock, vibration and high temperature and water vapor. Now the item has started the testing phase in real environment.

This is a kind of sample of a spatially printed part – if it works, it cannot be excluded that 3D printing will become an integral part of the entire fleet of US Navy ships.

Volkswagen will begin mass production of additives – target: 100,000 printed 3D parts per year
The time has come for another company with international popularity. Volkswagen, one of the largest automobile concerns in the world, will use additive technologies for mass production – the goal is to create at least 100,000 printed 3D elements per year!

However, before it reaches this ceiling, production will take slightly more modest projects. A decision has already been made on the mass production of additive gear knobs, characterized by an unusual design and the possibility of personalization. According to experts, the whole process of implementation and integration of spatially printed parts with standard components will continue over the next three years.

Rolls-Royce is testing its latest aircraft engine with 3D printing elements.
The silver medal goes to Rolls-Royce – the company wanted to move to a higher level of production, using 3D printing in the production process of its newest aviation engine. The use of additive technologies is a huge time saving for Rolls-Royc, especially in the case of parts with complex geometry that require possible redesign. According to preliminary information, the first stage of testing passed with excellent results – the use of a number of modern technologies in our newest engine brought the desired effect.

Bugatti and Siemens use 3D printing to enhance Chiron
In the top 5 best this year, Bugatti and Siemens are using 3D printing to optimize one of the fastest cars in the world, the Bugatti Chiron. Thanks to progressive technology, the car’s weight was reduced by 33 lbs, which reduced the time of the Nardò test track in Italy by 5 seconds. The main changes are new wheels, silencer tips and … carbon fiber wipers and thinner rear window.

However, this is not the end of 3D printed innovations related to the Bugatti Chiron – a few days ago, tests of brake calipers in the Chiron model were completed. Bugatti tested them during the current year, exposing a series of extreme tests to simulation machines that simulate the operation of a car moving at high speed. Most importantly, the stamped brake calipers will be part of the production for the Chiron series next year!