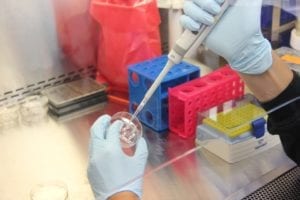 Researchers from the University of Groningen in the Netherlands have developed an artificial tooth that has the property of destroying germs already at the molecular level – said the prestigious magazine “New Scientist”. This means that the plaque and tartar do not settle on the teeth. The final product texts are currently in progress.

Research on artificial, bactericidal teeth lasted at the University of Groningen for several years. At the beginning, the researchers developed a special, antibacterial plastic, consisting of quaternary ammonium compounds embedded in the polymer structure. It is able to destroy bacteria responsible for plaque and calculus formation as well as the formation of caries at the molecular level. During preliminary tests, the material was placed for 6 days in a mixture of saliva and food debris. About 99% of bacteria harmful to the teeth were killed. Importantly, the material is also completely safe for humans.

As the Dutch scholars point out, the material can be used to produce substances for filling cavities, orthodontic appliances, and – thanks to the use of 3D printing technology – individual artificial teeth. There are ongoing tests on the durability of the polymer, as well as studies on its response to long-term contact with food, beverages and toothpaste. According to recent reports, they should be completed within a few months, and soon after that the final product will appear on the market.