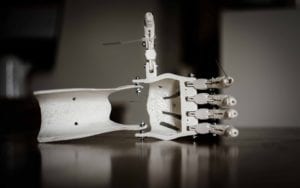 Technology that has changed industry enters hospitals. Thanks to 3D printers, scientists are able to create models and prostheses, and at any moment they will print organs “made to measure”

Roland Lian Cung Bawi, son of Burmese immigrants living in the USA, suffered from a serious heart defect. The surgeon, who was planning to operate a 14-month-old boy at the beginning of the year, had problems planning the surgery because the images obtained during the tomographic examination did not give a clear picture of the situation. The specialists from the School of Engineering in Louisville, who used a 3D printer to create an enlarged model of the boy’s heart, got to the rescue. It took 20 hours to print and cost $ 600. Thanks to the model, the cardiac surgeon found the optimal way to perform the surgery and the operation was successful.

However, this is only the beginning of the revolution. 3D printing – that is, overlapping the next layers of building material, resulting in a three-dimensional object – is becoming cheaper and can be used in more and more ways. With this method, not only plastic toys or parts of devices are manufactured (including such as hearing aids). Physicians also design prostheses for specific patients, and the printing of tissues and organs from living cells, currently being tested in laboratories, can reach transplant clinics within a few years.

How can you precisely monitor the work of the whole heart of the patient or apply electrical impulses at selected places on its surface? The scientists from Washington University and the University of Illinois responded to the challenge posed by cardiologists. They created a flexible membrane that can be applied on the heart (specifically on the covering of the pericardium, i.e. the “bag” of connective tissue). You can print such a “T-shirt” in three dimensions to match the organ of a particular patient. The diaphragm contains flexible electronics that measure temperature, mechanical pressure and ECG. They can also stimulate the heart muscle with electrical impulses. According to researchers, this is how future pacemakers may look like, as well as systems that warn of impending infarction in seriously ill patients.

Instead of skin and bones

A famous saying goes that we all have identical stomachs. However, scientists know that this is not true. Yes, there is a general “plan to build” part of our body, but in each of us organs have different sizes, and sometimes even shape. What’s more, the disease can change them so that each “repair” requires an individual approach. And here the latest technologies come with the help of doctors. Data from imaging examinations such as roentgen, tomography or magnetic resonance imaging can be introduced into a computer to design synthetic elements that replace what the patient lacks.

Eric Moger, 61-year-old restaurant manager from Great Britain, found out for himself. When he was getting ready for the wedding five years ago, he detected a malignant tumor under the skin of his face. As a result of treatment, he lost most of her left part, including the eye, cheekbone and a portion of the mandible. Radio- and chemotherapy, which saved his life, made it impossible to perform reconstructive procedures with the use of living tissues. After four years of torment, Eric helped Andrew Dawood, a surgeon at the dentist, who for some time had been experimenting with printing three-dimensional models of the jaws of his patients. As a result, an artificial part of the face was made of titanium, plastic and silicone. It is not perfect, but thanks to it the patient can eat and drink again.

These types of dentures are already in common use. The market is the invention of the American company Oxford Performance Materials called OsteoFab, which allows the printing of polymer implants placed in places of bone defect. The material is not only resistant and bio compatible (i.e. well tolerated by the body), but also so constructed that bone tissue cells can grow on its surface. Thanks to this, the implant simply fuses with the bone. This method is much less onerous and risky for the patients than the transplantation of their own bone fragments taken from other parts of the skeleton. Last year, the surgeon replaced 75 percent with a polymer prosthesis in an American patient. The OsteoFab technique has been approved for use in the USA, it is also used in Europe, Australia and South America. In total, several hundred patients have already been cured by this method.