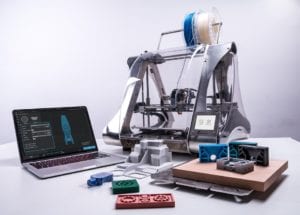 In 3D printing, only the imagination and working space of the 3D printer table limits us. The emergence of 3D printing technology influenced the dynamic development of biotechnology. 3D printers have complemented the technological gap and made it possible to conduct research that was previously impossible due to technical limitations. Enthusiasm connected with 3D printing is the most understandable.

We will focus on the unconventional use of 3D printing technology that allows you to start scientific research that previously was impossible.

The most can be gained by universities conducting research in such fields as biotechnology, cell biology, dentistry, medicine and related biological sciences. 3D printers are not only perfect for the production of laboratory equipment, props for students or for the creation of, for example, personalized prostheses, whose accurate and individual reproduction will be conducive to a faster recovery of patients. Certainly, it will also support the scientific work of students and academic staff at universities.

The 3D printer allows you to create custom elements. Unfortunately, research has a strictly defined budget, and therefore there is no place for non-standard ideas. Having a professional 3D printer at the cathedral will certainly solve this problem. An additional advantage is the significant reduction of delivery time of non-standard elements from several weeks to even several hours. The printout of a very complicated element lasts up to several hours. Within a few years, the 3D printer will become standard equipment in the laboratory like an autoclave.

Space technology and a 3D printer.
Many people certainly associate scenes from science fiction movies in which tissues – skin – were printed using cosmic technology. Such solutions cease to be a dream and become a reality. Among other things, the unusually promising project is Cambrian Genomics from San Francisco, which uses 3D printing technology to create the world’s first DNA printer. The largest research centers in the world are intensively using the potential of 3D printers in their scientific research. It’s possible that they’re just a decade away from printing living tissues.

Without a doubt, 3D printers in the future will become the basic equipment not only in the laboratory but also in everyday life. It is worth to buy a professional 3D printer today and enjoying the technology of the future.